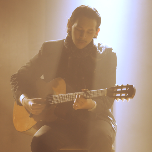 Timothy LaRoque is a 22-year old singer-songwriter from Hollywood, Florida. He’s come up in the South Florida scene as a leader, specifically in his groups The Summit and (more recently) The Def Cats. Having played all over Florida and surrounding states and with a wide ranging repertoire to meet his crowds’ needs and desires, he is the ultimate frontman and lead guitarist all in one. Released this past April and recorded in Tennessee over a two week period where he stayed with his aunt Cricket and uncle Rob (producer and keyboardist on the EP) in the summer of 2021, his debut EP “Stuck In The Past” was recorded in-home in Hendersonville, with the drums being tracked at Peter Frampton’s Studio Phenix in Nashville (engineered by Grammy-winning Chuck Ainlay). Thanks to his uncle Rob Arthur, this project featured veteran musicians such as himself, Adam Lester (Peter Frampton), Shawn Fichter (Tim McGraw, Faith Hill) and Will Lee (Late Show with David Letterman).