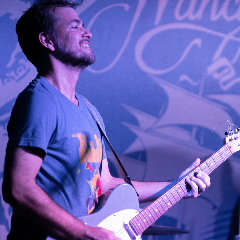 Miami Beach musical collective blending powerpop, psychedelia, and stoner rock into something esoteric and irreverent, but always accessible. The group led by Roger Houdaille has been producing music non-stop ever since their breakout song "Something Unreal" in 2008. Their 13th album, Spook Du Jour, released in 2022, shows the band keep their ever growing audience engaged, reaching the top 40 national college charts and gaining enthusiastic reviews from across the globe.