There are literally over 50 performances scheduled for June 21st, so we encourage you to dive into the full listings above for a comprehensive view of Make Music Miami. That said, here are some program highlights produced in collaboration with our partners:

Make Music Miami returns to The Underline Sound Stage this June 21, located at the intersection of SW 8th St and SW 1st Ave! Conveniently near the Brickell Metromover/Metrorail stations, be sure to stop by to add some live music to your Monday morning commute or lunch hour. All performances are free and appropriate for all ages.

Downtown Miami again celebrates Make Music Miami with a full day of performances to celebrate the summer solstice and the global phenomenon of Make Music Day! Enjoy lunch or happy hour in Paul Walker Park and sway to the tunes of Miami’s best local bands.

Make Music Miami takes over takes over Lincoln Road to welcome summer with live music! Enjoy many of your favorite local bands across two stages, circus performers from Dangerfun Sideshow  and an interactive exhibit by Moonlighter Makerspace. Here’s what’s on deck at the two stages: 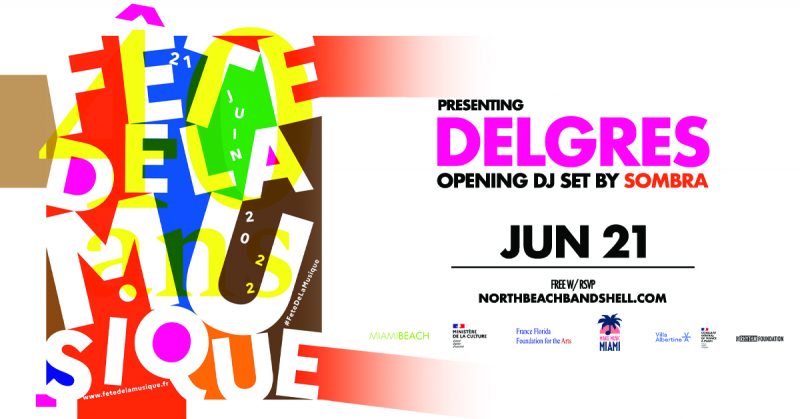 Welcome summer with music, the French Way! Fête de la Musique is the annual holiday that started in Paris, and now has become an annual summer highlight at the Bandshell. Presented with French Cultural Services and the Rhythm Foundation, in partnership with Make Music Miami, and with the support of Miami Beach Arts in the Parks!

Delgres is a Paris-based Delta blues power-trio that connects the dots between the French Caribbean island of Guadeloupe, the Louisiana delta blues, and Paris. The band finds also connections with Saharan Tuareg soul as much as The Black Keys or John Lee Hooker. Born in the Parisian suburb to Guadeloupean parents, Delgres frontman Pascal Danaë picked up his first guitar at age 15 beginning the journey of a globe-trotting musician who would one day share the stage with Harry Belafonte, Neneh Cherry, Peter Gabriel, Gilberto Gil,Youssou N’ Dour, Ayo.

Why the name Delgres? Louis Delgres gave his life fighting Napoleon’s army in 1802 when the French re-installed slavery in Guadeloupe. His rebellion is part of a historic story that joins the Haitian revolution of 1803/1804, and the ensuing dispersement of French Caribbean people into New Orleans. This special band finds musical power in this historic connection.