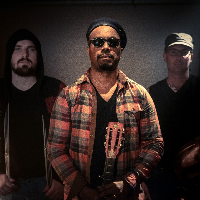 Delgres is a Paris-based Delta blues power-trio that connects the dots between the French Caribbean island of Guadeloupe, the Louisiana delta blues, and Paris. The band finds also connections with Saharan Tuareg soul as much as The Black Keys or John Lee Hooker. Born in the Parisian suburb to Guadeloupean parents, Delgres frontman Pascal Danaë picked up his first guitar at age 15 beginning the journey of a globe-trotting musician who would one day share the stage with Harry Belafonte, Neneh Cherry, Peter Gabriel, Gilberto Gil,Youssou N’ Dour, Ayo. Why the name Delgres? Louis Delgres gave his life fighting Napoleon's army in 1802 when the French re-installed slavery in Guadeloupe. His rebellion is part of a historic story that joins the Haitian revolution of 1803/1804, and the ensuing dispersement of French Caribbean people into New Orleans. This special band finds musical power in this historic connection.