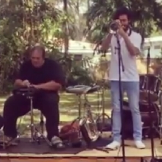 Sean Dibble, José Javier (JJ) Freire, & Alejandro Sierra will be playing high energy “World Music” that will take you on a musical journey!  Grammy Award winning drummer/producer José Javier (JJ) Freire is well known both locally, and internationally as a member of the groups, Bacilos, Zona De Bomba, Suénalo and many others. Alejandro Sierra will be playing Trumpet, & Saxophone. He has played with numerous acts throughout his career including La Tabla, Team De La Habana, Charanga Latina, and many more. He currently can currently be heard playing w/ local bands Sol & The Tribu & The OCP.  Sean Dibble has been an accompanist at New World School of the Arts since 2000, and has worked with many local bands. Sean has composed music for many dance performances at NWSA, and is featured on the title to track of Julio Iglesias’ record “Noche De Cuatro Lunas”.