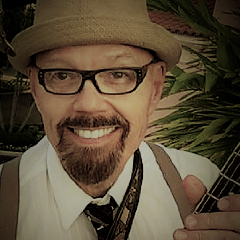 Lucian "Luke" Williams began his musical career in the Northeast, growing up in New Britain, CT. After studying arranging at Berklee College of Music in Boston, he taught guitar at the Hartford Conservatory and performed with bands in the New England area. He was the musical director for the Neighborhood Arts Program in New Britain, directing the orchestra and smaller ensembles. During this time he also took private lessons from guitarists Mick Goodrick, Chuck Wayne, and George Benson. He began his serious vocal training at the Hartford Conservatory under Jacqueline Jarrett and David Baker.Luke is capable of performing, as a solo entertainer, an unusually wide ranging repertoire because of his versatility on guitar, piano, and vocals. An accomplished arranger with a vast library of charts, he can lead a ten piece orchestra as competently as a trio or quartet.